At least 20 people were shot, 10 fatally, near a Lunar New Year celebration in the Los Angeles suburb of Monterey Park when a gunman opened fire inside a crowded dance studio, authorities said.

The gunman has not been identified and remains at large Sunday morning, said Capt. Andrew Meyer, of the Los Angeles County Sheriff’s Department Homicide Bureau, which is leading the investigation.

Some of the injured were in critical condition, while others were reported as stable, Los Angeles County Sheriff Robert Luna said at a news conference Sunday morning

Luna said five women and five men were killed in the rampage.

The gunman was only described as an Asian male 30 to 50 years old, Luna said.

“We’re going to use every resource available to us because we need to get this person off the street,” Luna said.

Luna declined to comment on a possible motive, but said, “everything is on the table.”

“We don’t know that this was a hate crime as defined by law, but who walks into a dance hall and guns down 20 people?” Luna said.

President Joe Biden has been briefed on the shooting by his Homeland Security advisor, according to the White House, and the FBI has joined the investigation.

“Jill and I are praying for those killed and injured in last night’s deadly mass shooting in Monterey Park. I’m monitoring this situation closely as it develops, and urge the community to follow guidance from local officials and law enforcement in the hours ahead,” Biden said in a statement.

In early alerts sent to Washington, investigators said “they had no idea who the suspect was,” Pierre Thomas, ABC News’ chief justice correspondent, said on ABC’s “This Week.”

U.S. Attorney General ‎Merrick Garland has also been briefed on the shooting, according to a statement from the Department of Justice.

Monterey Park had been hosting the Monterey Park Lunar New Year Festival this weekend, marking the beginning of the Chinese lunar calendar. The annual two-day street festival is widely attended, with previous celebrations drawing as many as 100,000 daily visitors, according to the city. More than 65% of Monterey Park’s about 60,000 residents identify as Asian American, according to the U.S. Census Bureau. 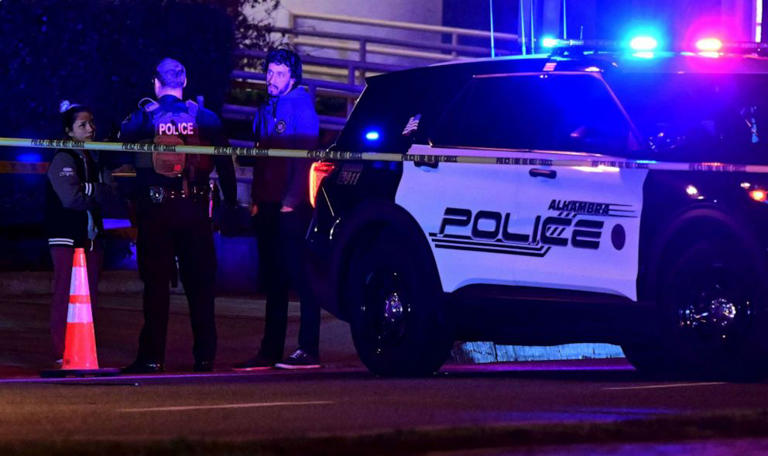 The Sheriff’s Department said the shooting erupted around 10:22 p.m. on West Garvey Avenue, near the downtown less than a block from where the festival was being held.

The gunman opened fire shortly after entering a dance hall, where people had been celebrating the holiday, police said. It was unclear what type of weapon he used, but Luna said detectives do not believe an assault weapon was involved. 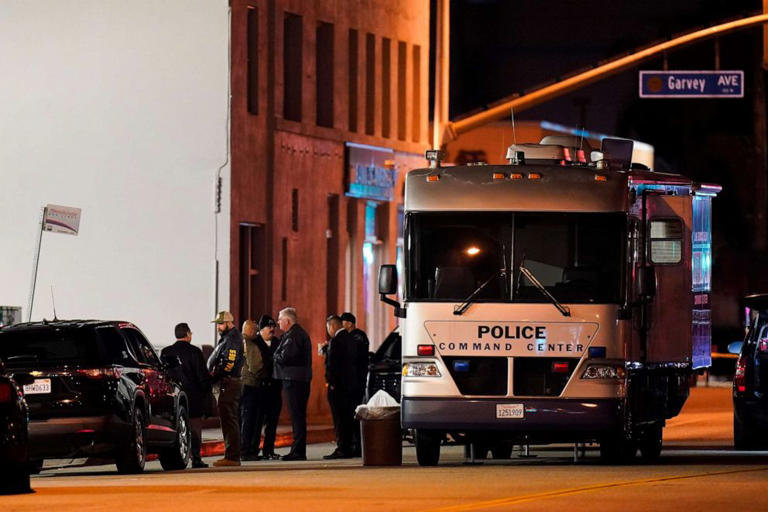 Monterey Park Police Scott Wiese said his officers responded to reports of shots fired at the dance studio and described a chaotic scene with panicked people running out of the dance hall and gunshot victims lying in the parking lot.

Police in the nearby city of Alhambra were investigating an incident, which also occurred at a dance studio, that might be connected to the shooting, Luna said.

In the Alhambra incident, which occurred 17 minutes after the Monterey Park shooting, an Asian man entered the dance studio with a gun, and several people there wrestled the weapon away from him before he fled the scene. Luna said a white cargo van witnesses spotted at the Alhambra incident is a “vehicle of interest” in the investigation.

“To have this tragedy occur on Lunar New Year weekend, makes this especially painful,” Alhambra Mayor Sasha Renée Pérez said in a Twitter post Sunday. “Monterey Park is home to one of the largest #AAPI communities in the country. This is a time when residents should be celebrating with family, friends and loved ones – not fearing gun violence.”

In a statement Sunday morning, the city of Monterey Park clarified that the shooting did not occur at the Lunar New Year Festival but at the dance studio near the festival that was not connected to the festivities. Officials said Saturday’s festival events were scheduled to finish at 9 p.m.

ity officials said all festival activities for Sunday have been canceled.

“Even though the incident did not occur at the 2023 Lunar New Year Festival, an active investigation is currently underway and the area near and around the festival is affected. As a precaution and for the safety of everyone, the City regrets to announce the cancellation of the second day of the festival,” city officials said in a statement.

The L.A. County Sheriff’s Department said it would lead the investigation, after earlier saying it would assist Monterey Park Police. The FBI said it had responded to the scene to assist.

“Monterey Park should have had a night of joyful celebration of the Lunar New Year. Instead, they were the victims of a horrific and heartless act of gun violence,” Newsom tweeted. “Our hearts mourn as we learn more about the devastating acts of last night. We are monitoring the situation closely.”

Richmond took down its racist statues. But now, the city doesn’t know what to do with them

Norway looks to donate $7.3 billion in aid to Ukraine