Vice President Kamala Harris lashed out at the media in an end-of-year interview claiming they have failed to cover her strengths during her tenure.

Harris, speaking with Washington Post columnist Jonathan Capehart who lavished praise on the VP, said that ‘what you’ve been able to see is based on what gets covered.’

Harris did not speak about her appointed role within the Biden administration to work on the crisis at the border, which has been referred to as a ‘once-in-a-generation’ storm in the wake of Title 42 having lapsed.

On Friday, border patrol reported having over 233,000 migrant encounters, the highest ever in November and a 33 percent increase from last November.

The Biden administration is under increasing pressure to solve the crisis, and has asked the Supreme Court to delay the end of Covid-era Title 42 – which makes it easier for the US to expel undocumented migrants – until after the holidays.

The Biden-Harris team is currently facing scrutiny over the chaos at the US-Mexico border as thousands of migrants are expected to try and seek asylum or sneak through.

Desperate migrants huddled at bus stops and propped up makeshift tents in freezing temperatures in El Paso, after making their long and treacherous journeys to Texas.

After fighting off looting cartels, walking through hazardous jungles, and cramming on overcrowded fishing boats, many of the exhausted asylum seekers told DailyMail.com they were relieved to have made it to the US before the imminent end of the Covid-era rules.

Title 42 was set to expire Wednesday, but Chief Justice John Roberts temporarily halted its end and the Biden administration later asked the Supreme Court to keep it in place until December 27. The Supreme Court is yet to respond.

Migrants’ haste to cross with Title 42 in place may seem contradictory, because the policy makes it easier for the US to expel undocumented migrants. But many anticipated that the lifting of it would make crossing more difficult, at least temporarily, due to increased migrant numbers and military presence at the border. 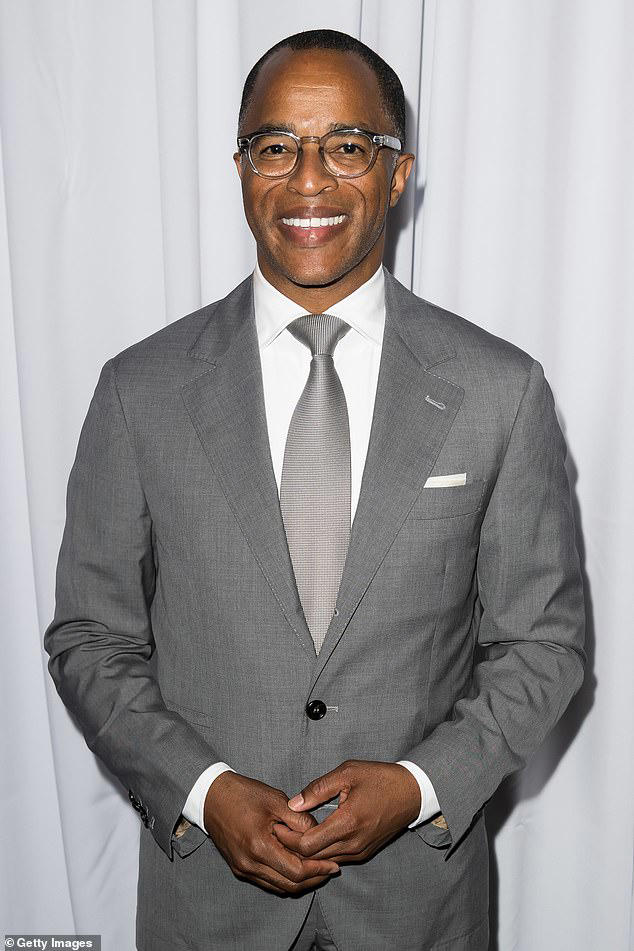 Harris, speaking with Washington Post columnist Jonathan Capehart, said that ‘what you’ve been able to see is based on what gets covered’© Provided by Daily Mail 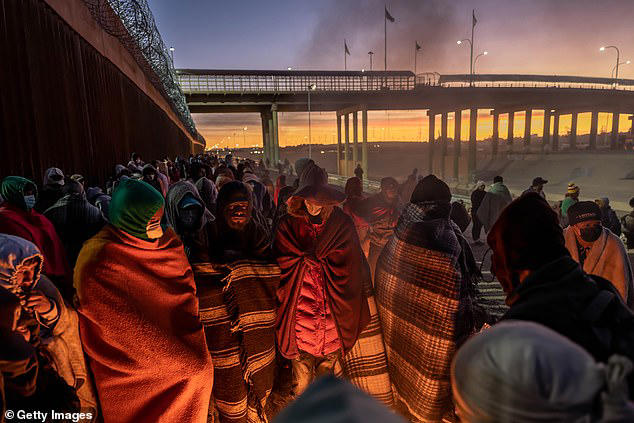 Harris did not speak about her appointed role within the Biden administration to work on the crisis at the border, which has been referred to as a ‘once-in-a-generation’ storm in the wake of Title 42 having lapsed© Provided by Daily Mail 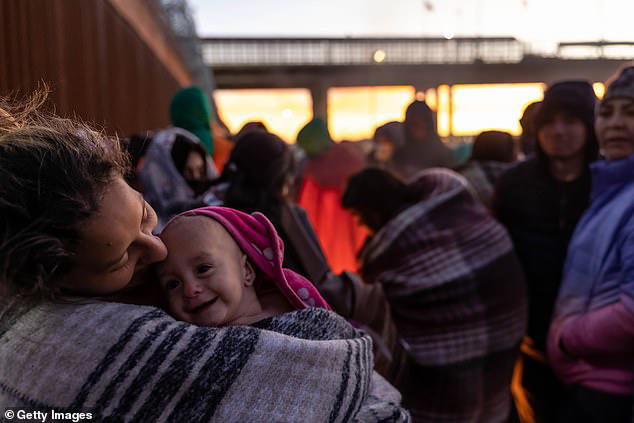 In a Friday news dump, border patrol reported having over 233,000 migrant encounters, the highest ever in November and a 33 percent increase from last November© Provided by Daily Mail 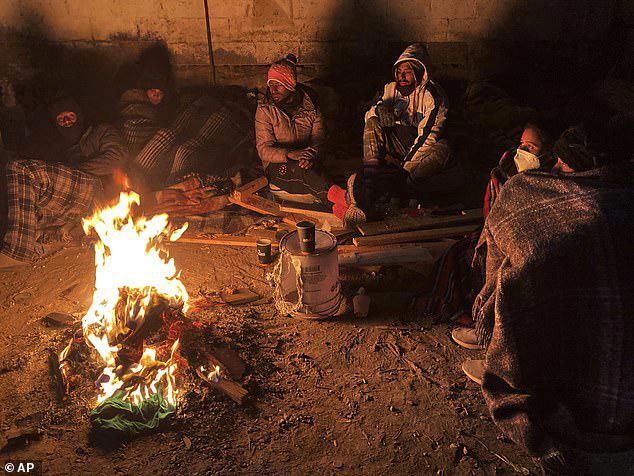 Desperate migrants huddled at bus stops and propped up makeshift tents in freezing temperatures in El Paso, after making their long and treacherous journeys to Texas© Provided by Daily Mail 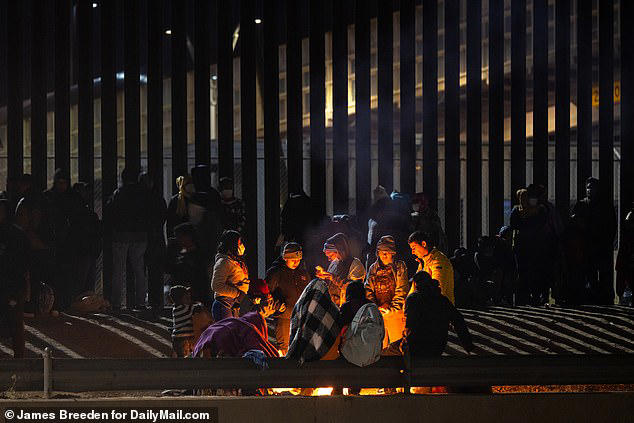 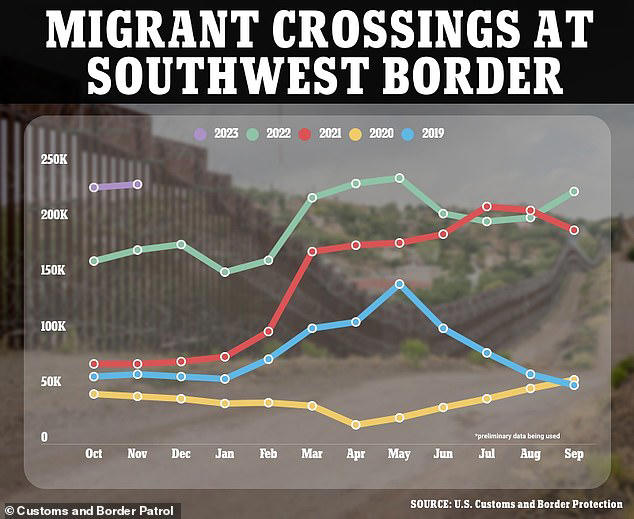 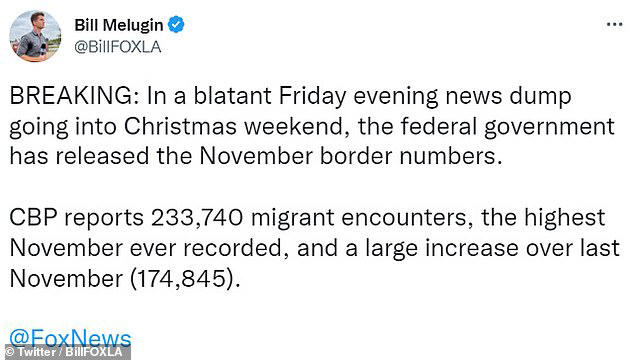 More than 400 National Guard troops were deployed Tuesday before the policy’s expected end, causing dozens more asylum seekers to make a break for the border to avoid grim clashes.

Many believe that number could be even higher when Title 42 ends, with Axios reporting 14,000 daily crossings could occur.

In Capehart’s Washington Post column, he writes that Harris had ‘a most excellent year’ and said: ‘President Biden’s electoral right-hand ma’am is finishing a banner year filled with domestic barnstorming and high-wire diplomacy.’

He first cited Harris’ appearance at the Munich Security Conference in February, where she sounded the alarm on the coming Russian invasion of Ukraine.

However, Harris was roundly mocked for saying that Europe had enjoyed ’70 years of peace and security’ since World War II.

Harris has faced other gaffes, including mixing up North and South Korea in a speech while overlooking the DMZ, and stumbling through a speech on job development.

She also passionately defended her role defending abortion rights in the wake of the Dobbs ruling,

According to excerpts published from a new book about the Biden administration’s first two years by Politico on Tuesday, Biden called Harris a ‘work in progress’ and grew angry with her and second gentleman Doug Emhoff after hearing their complaints over her role in the administration.

Friday night temperatures are expected to drop to 19F in El Paso, where sidewalks are serving as living quarters outside a bus station for some migrants who can’t find space at the city’s expanding network of packed shelters.

Across the border from El Paso in Ciudad Juárez, a group of Venezuelan migrants sought refuge from the cold under blankets beside a bonfire in a dirt alleyway by a crumbling cinder block wall.

‘We’re from the coast [of Venezuela] with lots of sun and the cold affects us [here],’ said 22-year-old Rafael Gonzalez, a native of La Guaira on the Caribbean coast. ‘The shelter here is very full…And that means it’s our turn to be here, having a little bonfire.’

He and others said they are eager to learn whether the US will lift restrictions on migrants seeking asylum at the border.

Title 42 applies to all nationalities but has most affected people from countries such as Mexico, Guatemala, Honduras, El Salvador and, more recently, Venezuela.

Immigration advocates have sued to end the use of Title 42. They say the policy goes against American and international obligations to people fleeing persecution and is outdated now that Covid treatments have improved.

Conservative-leaning states appealed to the Supreme Court, warning an increase in migration would take a toll on public services and cause an ‘unprecedented calamity’.

In El Paso, Texas National Guard members have taken up positions at the behest of the state, while volunteers and law enforcement officers fear some migrants could succumb to the cold. Nighttime temperatures have been in the 30s and will be even colder in the coming days. 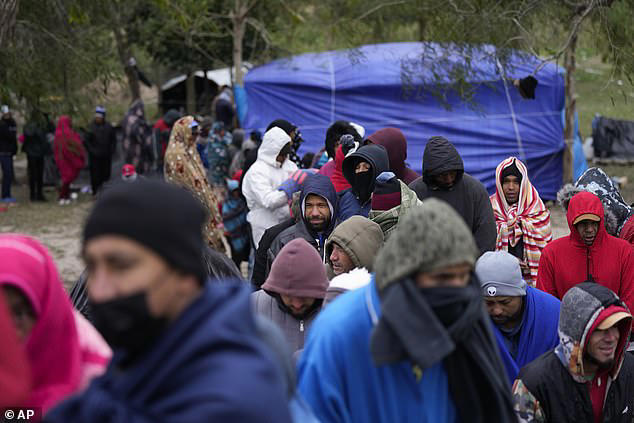 Elsewhere, hundreds of migrants fashioned a makeshift encampment – with black plastic bags for crude tents – and lined up for hot drinks in a park in Matamoros, Mexico, near Brownsville, Texas.

Shivering in the cold after his recent expulsion from the US, a former Venezuelan navy military policeman, Carlos Hernandez, spoke about how he, his wife and their three-year-old daughter recently struggled through the cold border river, only to be turned back after reaching the other side.

Hernandez said he had a falling out with superiors in Venezuela for refusing orders to take action against government opponents in the navy. He said he hoped to cross again and eventually reach Canada.

‘It was very cold,’ he said of the river crossing.

Hairdresser Grisel Garcés survived a harrowing, four-month journey from her native Venezuela through tropical jungles, migrant detention centers in southern Mexico and then jolting railcar rides north toward the US border.