An animal shelter in north-west London has launched a special appeal for an American Bulldog facing Christmas without a loving family home. The Metro has reported that Mayhew animal shelter in Kensal Green is urgently seeking a suitable home for five-year-old Zeusy, who has been looked after by the charity for the past 11 months. Representatives of the Mayhew animal charity have voiced concern that dog’s “affectionate” character may have been overlooked due to the “stigmatised” image of Bulldog breeds.

Zeusy first came to the attention of the Mayhew animal welfare charity after concerned passersby found him seemingly abandoned and tied to a lamppost in North Wembley.

Upon his arrival at the shelter, the five-year-old American Bulldog initially exhibited signs of fear and anxiety, shown through barking and growling.

Although Zeusy had been microchipped, attempts to contact his former owner have failed and nothing is known about his prior living conditions.

Since being rescued in January, Zeusy has undergone an extensive programme of training and welfare checks to ensure he is ready for rehoming, but the charity has been unable to find a willing family to adopt the canine.

Mayhew’s head of kennels, dog adoptions and fostering Merryn Walker explained: “Zeusy is one of those sad stories you read about over Christmas.

“When Zeusy came to us, he was clearly terrified and traumatised after having been left tied to a lamp post on a cold January night.

“We have no idea how long he had been left there and it is only thanks to the concerned people who spotted him that he is with us today. Who knows what could have happened to him otherwise.”

She added: “As we have been unable to contact the owner, we have no history whatsoever about Zeusy which would be incredibly useful for us.” 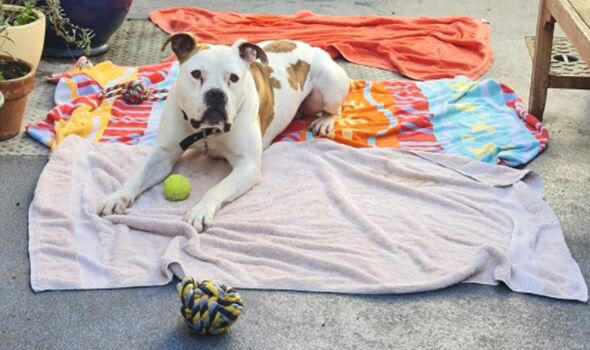 With the support and training offered by the animal welfare organisation, Zeusy’s true temperament has shone through over the past few months. Ms Walker described the pup as “affectionate and intelligent”

She explained: “We worked on strengthening Zeusy’s bonds with people by giving him choices about approaching, and used rewards-based training by giving him praise, treats and toys when he showed courage when engaging with people.

“This then encouraged Zeusy to offer more of the behaviour we were looking for. Zeusy is very trainable and biddable and would do well in a fun-loving home.”