Los Angeles City Councilmember Kevin de León was involved in a fight during his attendance at a Christmas tree lighting event Friday night in the city.

Video of the incident captured by a witness shows de León attacking a man in the hallway of the event in Lincoln Heights.

According to the Los Angeles Police Department, a large fight broke out at around 6:30 p.m. local time at the 3500 block of Valley Boulevard. Police said the eight people involved in the fight had left the scene before officers arrived.

Jason Reedy was assaulted by de León and has reported the incident to LAPD, Reedy’s attorney Shakeer Rahman said.

“Kevin de Leon is a disgrace,” Rahman told Fox News Digital. “Video footage clearly shows him and his supporters initiating this assault while Mr. Reedy stands with his hands up. Not only has Kevin de Leon lost all political legitimacy, his claims that he was the one attacked here simply underscores how he’s lost touch with reality.”

In a statement, de León alleged that he was “violently assaulted” by “self-proclaimed activists.”

“This evening a staff member, volunteer, and I were violently and physically assaulted by self-proclaimed activists at a community holiday event to the dismay of a multitude of families and children who were there to celebrate a Christmas tree lighting and to receive toys and food,” he wrote.

“The escalating rhetoric is hitting a fever pitch, transcending from verbal threats into actual acts of violence and must end before more serious harm or loss of life occurs,” the councilmember continued. “Violence is not free speech and has no place in politics or democracy.”

No suspects were taken into custody in connection with Friday’s attack. The incident remains under investigation.

The embattled de León has been a subject of controversy after leaked audio showed himself, former council President Nury Martinez, outgoing Councilman Gil Cedillo and a labor union leader engaging in a closed-door city council meeting that included racist language. Martinez resigned amid the outrage and Cedillo lost his re-election bid in June. 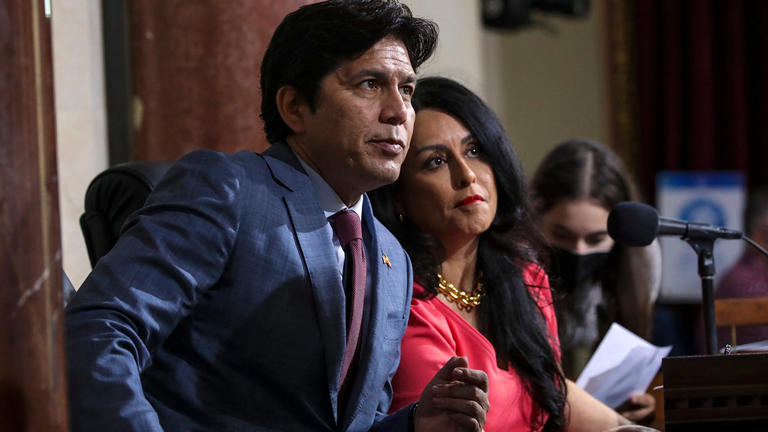 Earlier on Friday, de León had attended his first city council meeting in nearly two months since the scandal began. He has refused to step down from his position.

Three council members walked out of the meeting after de León showed up unannounced.