Donald Trump openly criticized Florida Governor Ron DeSantis on Sunday night, a gaping wound in a once-close relationship that’s since been marked by months of veiled jabs and reports of nasty personal comments.

DeSantis appears to have angered the former president by endorsing Joe O’Dea, a moderate GOP candidate in Colorado who has not shied away from criticizing Trump.

Trump wrote on his Truth Social app that DeSantis’ endorsement was ‘A BIG MISTAKE.’

DailyMail.com has reached out to DeSantis’ gubernatorial campaign for comment.

On Sunday, O’Dea’s campaign revealed that the popular Sunshine State governor had recorded a 50-second audio spot endorsing him for Colorado’s Senate seat.

‘I’ve watched Joe from a distance. And I’m impressed. This guy is not a career politician.’

He goes on to say that Bennet voted with President Joe Biden’s agenda ’98 percent of the time.’

DeSantis also touted O’Dea’s support for building a wall along the southwestern border with Mexico.

It’s a signature idea of Trump’s, though the former president was not mentioned.

‘Joe’s focused on building the wall and cracking down on crime. He’ll stand up to the big spending politicians in both parties and cut red tape,’ DeSantis says in the ad. ‘Vote Joe O’Dea and let’s turn Colorado red.’

O’Dea reacted to DeSantis’ support on Twitter: ‘Governor DeSantis is a fighter — a true leader — who has brought progress and prosperity to Florida. I’m honored to have his support.’

It’s a marked departure than how O’Dea has regarded Trump, who he pledged to ‘actively campaign’ against during a CNN interview earlier this month, should the ex-president run again in 2024.

‘They can run and serve for eight years,’ O’Dea said after listing off the trio. ‘I’m gonna do my job as a US senator to make sure that they have good campaigns in the primary here, so we have a good selection of candidates for 2024.’

And while neither Trump nor DeSantis have announced their intent to run, both men have consistently come out on top of early polls of who Republican voters want as their presidential nominee.

Multiple reports suggest Trump has been irate that DeSantis has not ruled out the possibility of challenging him in a primary.

A profile of the Florida governor’s meteoric rise in Vanity Fair revealed that the ex-president branded him as ‘disloyal’ and ‘overrated.’

An excerpt from Maggie Haberman’s book ‘Confidence Man’ published in The Atlantic claimed Trump had called DeSantis ‘fat,’ ‘whiny’ and a ‘phony.’ 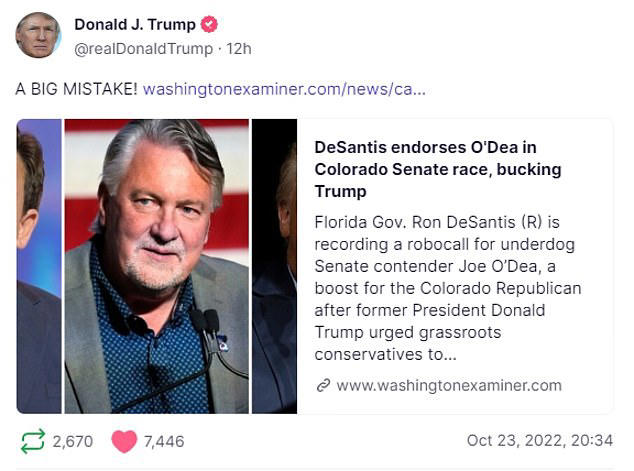 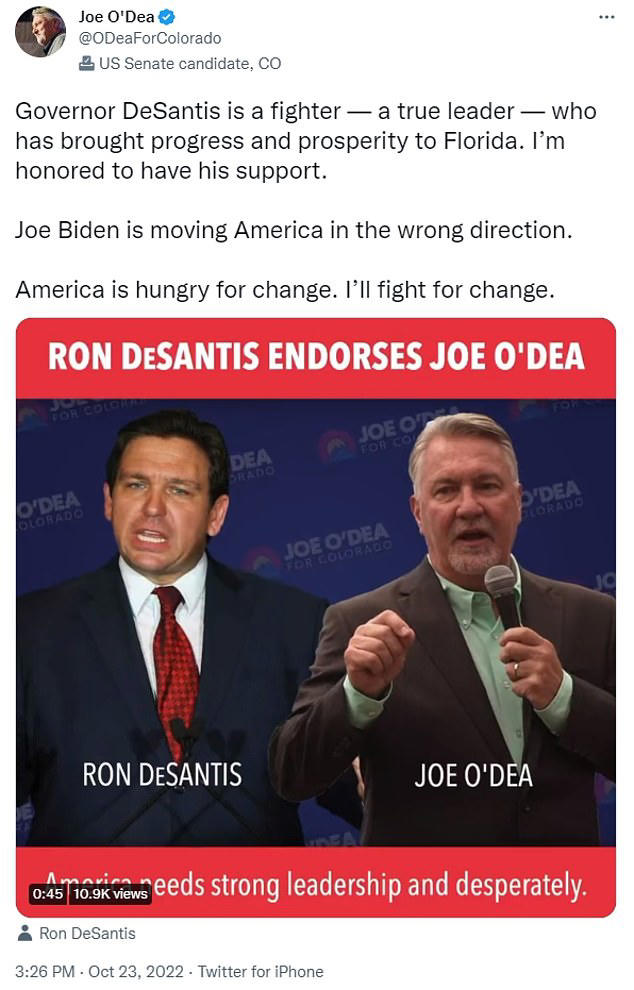 DeSantis’ narrow 2018 victory over ex-Tallahassee Mayor Andrew Gillum was widely credited to Trump’s support for his campaign – back when DeSantis was a member of the House Freedom Caucus.

And despite months of holding off on public attacks, DeSantis has savagely locked Trump in private, according to Vanity Fair.

While he’s thus far demurred from presidential speculation, the Sunshine State governor reportedly told donors that he would face a Trump challenge ‘head on.’

‘He calls him a TV personality and a moron who has no business running for president,’ a staffer told the outlet.

The report suggests his plan of attack would largely focus on showing Trump’s broken promises and empty threats as just bluster.

An unnamed Republican source recalled him telling donors, ‘[T]he only way to beat Trump is to attack him head-on. He says he would turn to Trump during a debate and say, “Why didn’t you fire Fauci? You said you would build the wall, but there is no wall. Why is that?”‘

Walmart CEO: Stores could close with uptick in shoplifting