Uvalde:365 is a continuing ABC News series reported from Uvalde and focused on the Texas community and how it forges on in the shadow of tragedy.

The Uvalde, Texas, school district — still facing withering criticism over its police department’s failings both during the May 24 elementary school massacre and since — announced the suspension of the entire district police force on Friday.

Hours later, Uvalde school district Superintendent Hal Harrell announced he would be retiring. There was no timeframe given for Harrell’s retirement, but the transition will be discussed in a closed session of the school board on Monday.

The district said it’s requested more Texas Department of Public Safety troopers to be stationed on campuses and at extracurricular activities amid the police department suspension, adding, “We are confident that staff and student safety will not be compromised during this transition.”

The length of the school district police suspension is not clear.

Lt. Miguel Hernandez, who was tasked with leading the department in the fallout from the shooting that killed 19 students and two teachers, and Ken Mueller, the UCISD’s director of student services, were placed on administrative leave.

Hernandez acknowledged in a law enforcement communication in August that he’d received formal notification from DPS that an officer applying to Uvalde’s school police force was under investigation for her response at Robb Elementary.

Mueller has elected to retire, according to the school district.

“Officers currently employed will fill other roles in the district,” the school district said. According to the district’s website, that includes four officers and one security guard.

“We’ve gotten a little bit of accountability,” an emotional Cross told ABC News. “So, it’s a win, and we don’t get very many of those.” 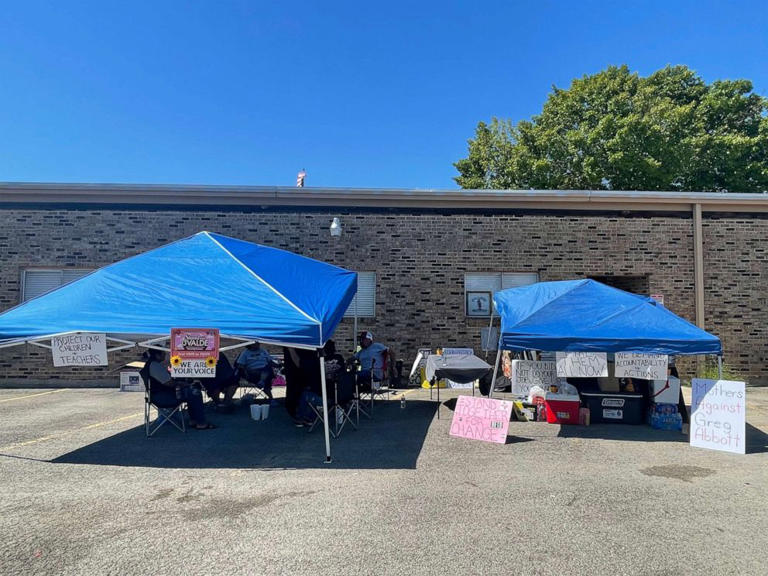 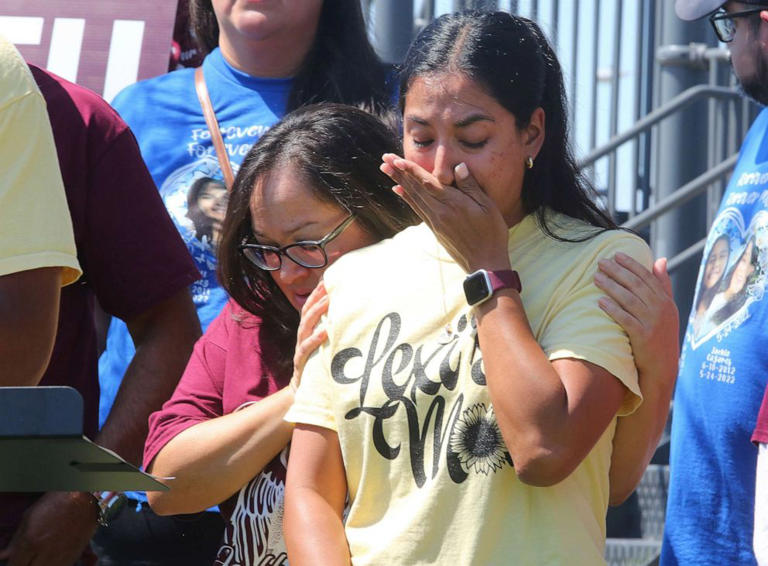 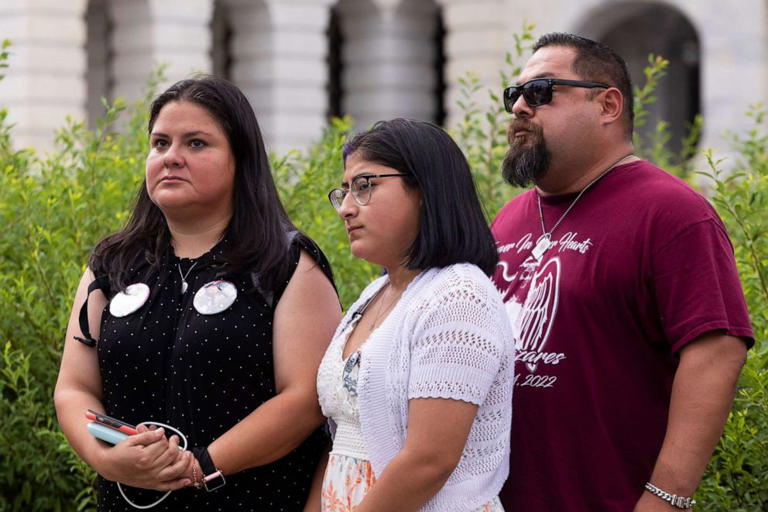 Gloria Cazares, whose daughter Jacklyn Cazares was a victim of the school shooting in Uvalde, Texas, stand with daughter Jazmin Cazares and husband Jacinto Cazares during a press conference on July 27, 2022 in Washington, D.C.© Anna Rose Layden/Getty Images, FILE

Berlinda Arreola, the grandmother of victim Amerie Jo Garza, added, “This is the perfect example of why we didn’t stop.”

“We are going to continue because there are other children that still go to school here. We have a lot of siblings of the deceased that go here,” she said. “We want to make sure our kids are secure and protected. And we want to make sure that the people protecting them are willing to protect them.” 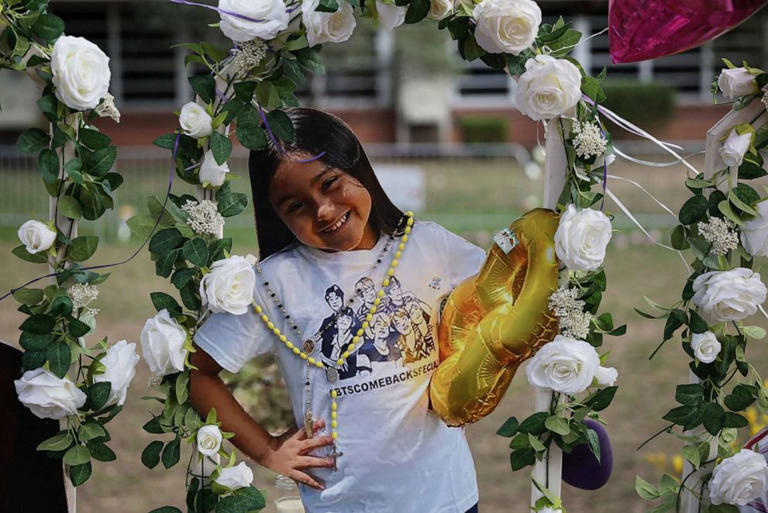 A photo cutout of Amerie Jo Garza, one of the 19 children killed victims in the Robb Elementary school shooting, is seen at school memorial site on the day of her funeral in Uvalde, Texas, May 31, 2022.© Shannon Stapleton/Reuters

The department suspension comes one day after the firing of Crimson Elizondo, the officer who was hired by Uvalde’s school district despite being under investigation for her conduct as a DPS trooper during the massacre.

Elizondo was the first DPS member to enter the hallway at Robb after the shooter gained entry. The trooper did not bring her rifle or vest into the school, according to the results of an internal review by DPS that was detailed to ABC News. 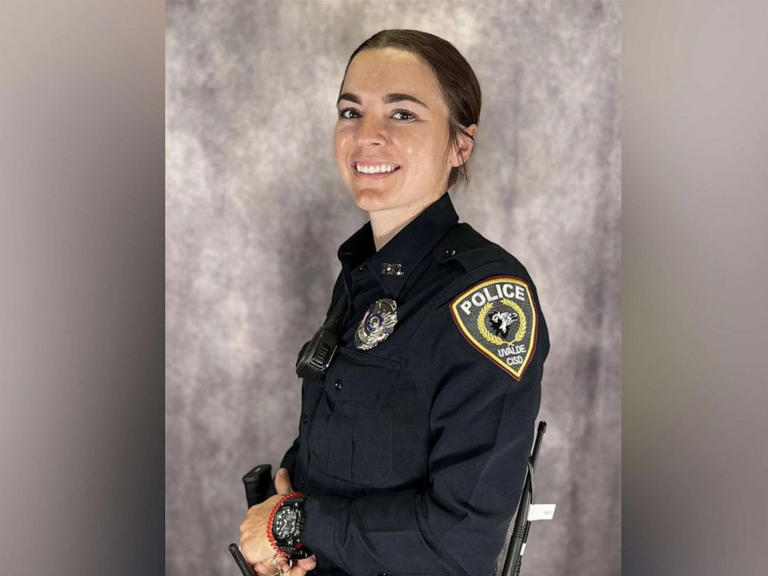 As a result of potential failure to follow standard procedures, the trooper was among seven DPS personnel whose conduct is now being investigated by the agency’s inspector general. The seven were suspended, however, by Elizondo resigning from DPS to work for the Uvalde schools she was no longer subject to any internal discipline or penalties. Her conduct — if found to be in violation of law or policy — would still be included in the final report from the DPS inspector general.

Results of the JPPI investigation “will inform future personnel decisions” and the Texas Police Chiefs Association’s review “will guide the rebuilding of the department and the hiring of a new Chief of Police,” the statement said.