Social Security’s cost-of-living adjustment (COLA) won’t be as robust as once anticipated.

More than 48 million Americans received a retired worker benefit from Social Security in July.  The vast majority of these recipients — 89%, according to an April survey from national pollster Gallup — are reliant on the program to make ends meet during retirement.

It’s a similar story for America’s huge labor force. When Gallup surveyed non-retirees earlier this year, a whopping 84% expected their Social Security benefit to be a “major” or “minor” source of income during their golden years.

The point being that Social Security is, or will be, an indispensable source of income for most Americans. That’s what makes the program’s annual cost-of-living adjustment (COLA) announcement during the second week of October so important. This year’s announcement is slated for release on Oct. 13 at 8:30 a.m. ET.

Social Security’s COLA is way for the program to recognize changes in the price of goods and services over time (i.e., inflation). If the price of food, shelter, medical care, and a number of other important goods and services increases, we should, ideally, see Social Security checks rise in lockstep to ensure beneficiaries don’t lose purchasing power over time. COLA is the “raise” being passed along to the program’s more than 65 million beneficiaries that accounts for inflation. You’ll note “raise” is in quotation marks to reflect that isn’t a typical raise offered by an employer to help folks outpace inflation.

Before 1975, there was no rhyme or reason as to when cost-of-living adjustments were passed along. Rather, special sessions of Congress arbitrarily assigned payout increases at random intervals. But since 1975, the Consumer Price Index for Urban Wage Earners and Clerical Workers (CPI-W) has served as Social Security’s inflationary tether.

The CPI-W is a predefined basket of goods and services with eight major spending categories and dozens upon dozens of subcategories, each of which has its own respective percentage weighting. These weightings allow for the CPI-W to be expressed as a neat and tidy single figure, which can be easily compared to the prior-year period to determine if inflation or deflation (falling prices) has occurred.

To calculate Social Security’s cost-of-living adjustment for the upcoming year, compare the average CPI-W reading from the third quarter (Q3) of the current year to the average CPI-W reading from Q3 of the previous year. If the current year is higher, inflation has taken place and beneficiaries are in line for a “raise.” The amount of the increase is the year-over-year percentage difference in average Q3 CPI-W readings, rounded to the nearest tenth of a percent.

High inflation should lead to the largest year-over-year nominal-dollar benefit increase in history in 2023. US Inflation Rate data by YCharts.

In 2023, recipients can count on receiving their largest Social Security raise in over four decades. The writing was on the wall that this would be the case when the U.S. inflation rate for June hit 9.1%, also a more than four-decade high.

However, the magnitude of next year’s COLA has been shrinking for more than a month. Initially, Mary Johnson, a Social Security policy analyst at The Senior Citizens League (TSCL), a nonpartisan senior advocacy group, estimated that COLA could come in as high as 11.4% in 2023 if inflation data continued to roll past expectations. The July inflation report from the Bureau of Labor Statistics (BLS), which showed the headline inflation rate easing, quickly put this high-end estimate to bed.

Following the release of August inflation data by the BLS last week, Johnson’s next high-end estimate of a 10.1% COLA can also be kissed goodbye.  Although Wall Street was less-than-pleased with the 8.3% August inflation rate, it continued a two-month decline in the headline figure. 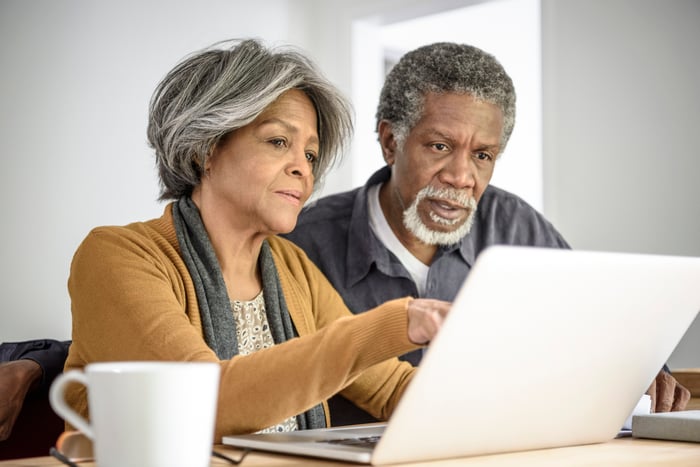 Superficially, the largest-ever nominal-dollar increase to Social Security checks can be viewed as a positive. But for the 48 million-plus retired workers currently receiving a benefit, Social Security’s 2023 COLA is just another in a long line of disappointments.

To begin with, it’s important to recognize that a large cost-of-living adjustment is a reflection of historically high inflation. Seniors aren’t simply going to be pocketing an estimated 8.7% increase in their monthly payout and living large. Instead, it’s far likelier that rapidly rising food, shelter, and medical care costs — including projected increases in Medicare Part B monthly premiums — will devour most or all of next year’s COLA.

The culprit behind this ongoing loss of purchasing power? The CPI-W.

As the CPI-W’s official name implies, it tracks the spending habits of “urban wage earners and clerical workers.” These are usually working-age Americans who aren’t receiving a Social Security benefit. More importantly, they spend their money very differently that the senior citizens who make up the bulk of Social Security’s more than 65 million beneficiaries. The end result being that key expenditures, such as shelter and medical care expenses, are being underweighted in the COLA calculation, while less-important costs, like apparel and education, are given added emphasis.

With no clear path to resolving Social Security’s COLA dilemma, retired workers can expect the purchasing power of their Social Security income to continue falling over time.

Houston Took In Thousands Of Afghan Refugees. Now It Can’t Take Care Of Them

Just 1 in 5 migrants in NYC are from Texas Gov. Greg Abbott, despite Eric Adams blame

Your Choice Of Charitable Gift, Thank you!