A recession is not “at all inevitable” as the Federal Reserve takes increasingly aggressive action to address sharply rising inflation, Treasury Secretary Janet Yellen said Sunday.

“I expect the economy to slow,” Yellen told “This Week” anchor George Stephanopoulos. “It’s been growing at a very rapid rate, as the economy, as the labor market, has recovered and we have reached full employment. It’s natural now that we expect a transition to steady and stable growth, but I don’t think a recession is at all inevitable.”

“Clearly, inflation is unacceptably high,” Yellen continued. “It’s President [Joe] Biden’s top priority to bring it down. And [Fed] Chair [Jerome] Powell has said that his goal is to bring inflation down while maintaining a strong labor market. That’s going to take skill and luck, but I believe it’s possible.”

The current inflation rate, year-over-year, is at a 40-year high of 8.6%, according to the most recent data from the Bureau of Labor Statistics.

On Wednesday, in an effort to cool those rising costs, the Fed increased interest rates by three-quarters of a percentage point — marking the largest rate increase since 1994. A higher interest rate increases borrowing costs for consumers and companies, potentially slowing inflation by decreasing demand.

“You say it’s not inevitable, but I guess the question is: Is it likely?” Stephanopoulos pressed Yellen, citing data on consumer pull-back and slowing movement in the job market and noting that she, Biden and Powell were all wrong about inflation’s lasting impact last year.

“But bank balances are high,” she continued. “It’s clear that most consumers, even lower-income households, continue to have buffer stocks of savings that will enable them to maintain spending. So I don’t see a drop-off in consumer spending as a likely cause of the recession in the months ahead. And the labor market is very strong, arguably the strongest of the post-war period.”

Yellen attributed inflation partly to Russia’s invasion of Ukraine, saying the conflict had increased global prices on energy and food. 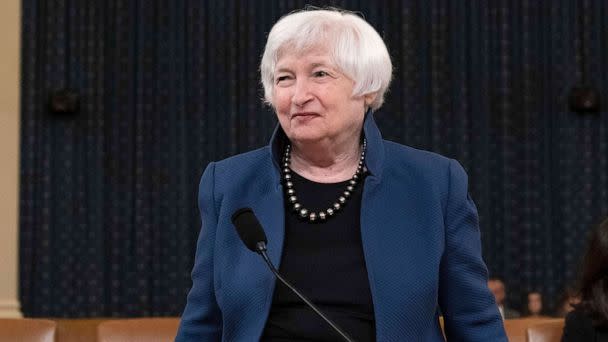 “It’s important to recognize that the United States is certainly not the only advanced economy suffering from high inflation,” Yellen said. “We see it in the U.K., we see it in France, Germany, Italy; and the causes of it are global, not local.”

She said “energy prices spillover is really half of inflation,” but that Biden has been working to keep oil prices from going even higher.

Gas prices remain at record highs after months of increases. The current national average is about $4.98 per gallon.

Yellen cited Biden’s “historic” release of oil from the strategic petroleum reserve over six months in an effort to reduce prices — though costs continue to climb.

“[Biden] stands ready to work and is encouraging producers of oil and refined products, gas, to work with him to increase supplies, to bring gas prices and energy prices down,” Yellen said.

On Wednesday, Biden sent a letter to seven major oil refiners in the U.S., blasting them for posting record profits while consumers face record-high gas prices and calling on them to increase production.

The American Petroleum Institute fired back, with its CEO and president arguing it’s “the administration’s misguided policy agenda shifting away from domestic oil and natural gas [that] has compounded inflationary pressures and added headwinds to companies’ daily efforts to meet growing energy needs while reducing emissions.”

“How do you respond to that?” Stephanopoulos pressed.

“I don’t think that the policies are responsible for what’s happening in the oil market,” Yellen said. “I think that producers were partly caught unaware of the strength of the recovery in the economy and weren’t ready to meet the needs of the economy. High prices should induce them to increase supplies over time.”

While long-term efforts to bring down the cost of gas are being debated, Stephanopoulos asked about the short term.

“Several in Congress are calling for gas tax holidays. Prices average around $5 a gallon. Is that on the table?” Stephanopoulos asked.

“President Biden wants to do anything he possibly can to help consumers,” Yellen said. “Gas prices have risen a great deal and it’s clearly burdening households. So he stands ready to work with Congress, and that’s an idea that’s certainly worth considering.”

“We all recognize that China engages in a range of unfair trade practices that it’s important to address,” Yellen said. “But the tariffs we inherited, some serve no strategic purpose and raise costs to consumers. And so, reconfiguring some of those tariffs so they make more sense and reduce some unnecessary burdens is something that’s under consideration.”

I’m in shock at what I found—how do I make him stop?