Barack Obama is celebrating the birthday of his “love, partner, and best friend,” Michelle Obama, with a photo of the two taken on a balcony in what appears to be one of their favorite vacation spots: Hawaii.

“Happy birthday, Michelle,” the former president, 60, wrote in a tweet Monday, along with a photo of the two in Hawaii earlier this month. “My love, my partner, my best friend…”

The former first lady turned 58 on Monday, and a host of big names spoke up in honor of her big day.

Current First Lady Dr. Jill Biden — a pal and collaborator since their time in the White House together — sent well wishes along with a throwback photo of the pair.

© Provided by PeopleMark Wilson/Getty From left: Michelle and Barack Obama

Mrs. Obama, meanwhile, used social media to urge her followers to celebrate something else: the legacy of the late Dr. Martin Luther King, Jr. by calling elected officials and urging them to pass the Freedom to Vote: John R. Lewis Act, a major reform bill backed by Democrats.

Mrs. Obama has been a vocal proponent of voting rights bills in recent months, recently writing an open letter about the need to protect the right to vote.

“From Georgia and Florida to Iowa and Texas, states passed laws designed to make it harder for Americans to vote. And in other state legislatures across the nation, lawmakers have attempted to do the same,” she wrote in the letter, which was published earlier this month as an ad in The New York Times.

She continued: “This type of voter suppression is not new. Generations of Americans have persevered through poll taxes, literacy tests, and laws designed to strip away their power — and they’ve done it by organizing, by protesting, and most importantly, by overcoming the barriers in front of them in order to vote. And now, we’ve got to do the same. We’ve got to vote like the future of our democracy depends on it.”

Mrs. Obama also recently issued a call to action through her organization When We All Vote to protect voting rights and also set an ambitious goal: to register a million new voters across the country, ahead of the 2022 midterm elections.

She has also managed to carve out time for fun this past year, also, and made an appearance in the recent premiere episode of Black-ish‘s final season.

She appeared in the episode as an unexpected guest at a fundraising event that Bow convinces husband Dre (Anderson) to attend in hopes of making some new friends, even though he is “convinced there will be nothing but dud husbands there to befriend,” according to the episode description.

The Obamas spent part of the recent holiday season in Hawaii, continuing a decades-long family tradition of celebrating Christmas in the place where the former president grew up. 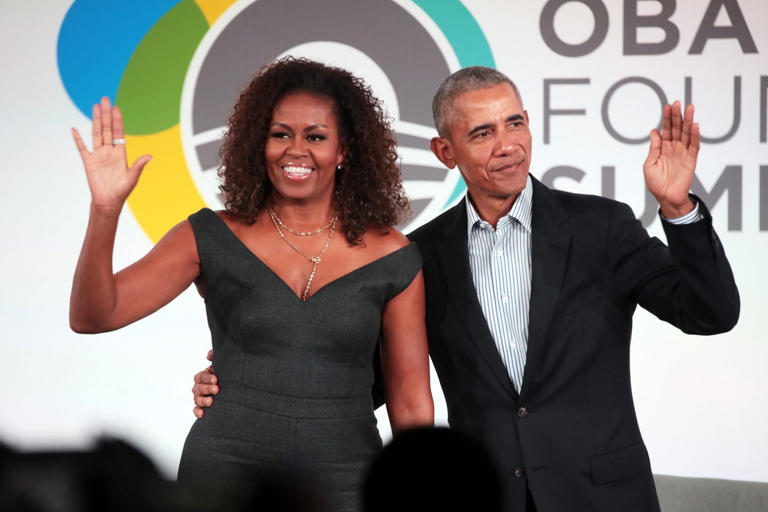 © Provided by PeopleScott Olson/Getty From left: Michelle and Barack Obama in 2019

In an interview last year, Mrs. Obama looked back at the long arc of her marriage.

“Before the White House, before the kids, before careers, it was just me and Barack together shaping our lives, building a friendship, being one another’s everything,” she told PEOPLE.

And “that’s what we were able to return to once the White House was over and the kids were grown and you knew they were okay,” she said.

“We came through the struggle together, which makes our foundation even more solid than it was,” the former first lady said then. She added: “I am happy to say that I can now look up from all of that and look over across the room and I still see my friend.”