A New York City family is once again facing calls from child protective services after their son, an 11-year-old drag queen, was featured in a shoe ad.

At first, Wendy wasn’t sure how to handle Desmond’s new interest, but after talking to a therapist she decided to just let Desmond find his own way. Now, years later, he’s a pint-sized star in his own right, performing at events and talking to his fans on social media (with mom’s supervision).

“We had to let go of that thought — ‘What are other people going to think?’ — because it made him happy,” said Wendy.

But with Desmond’s rising star came a wave of harassment. He soon started showing up in conservative media in articles conflating his performances with child abuse, pedophilia, and exploitation.

“They’re basically saying queer kids equal pedophilia and sexuality. It’s really quite disgusting they’re seeing kids like this,” said Wendy. “For whatever reason, the conservative media has really made a target of Desmond. No matter what it is, no matter what we do, they come after us.”

That’s when the calls started. People who’ve never met the Napoles family, most from out of state, started calling the authorities with complaints. The problem grew to encompass several different agencies and, at one point, Wendy said there were more than 200 open cases about Desmond.

Since these complaints are all treated seriously by authorities, the family was subjected to home visits, and Desmond would often be pulled out of school for interviews with agents.

None of the complaints have ever found wrongdoing, but earlier this year Desmond was featured in a Pride campaign for Converse, and the calls started all over again.

“They’re getting the same kind of complaints, and they’re so frustrated and annoyed,” Wendy said.

“We’re going through another nightmare.”

Despite what the callers allege, Wendy said Desmond’s performances are all kid-friendly, performed for all-ages crowds with no adult themes. Desmond does collect tips but, like all the other money he’s been paid, it goes straight into a trust fund he’ll get access to when he’s 18.

“These kids aren’t performing adult shows, obviously. I would equate it closer to theater or drama class,” said Wendy.

“How innocent is that?” 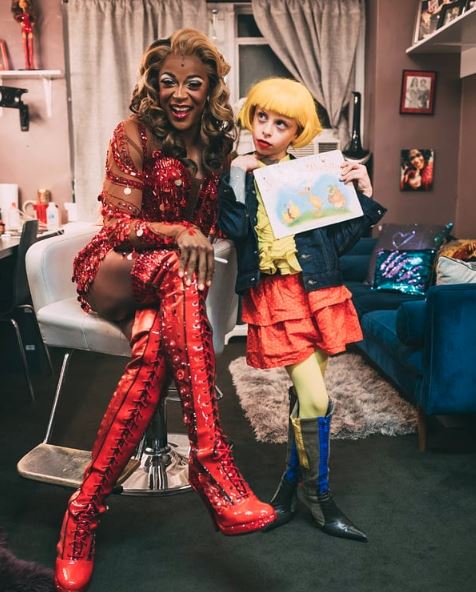 Aside from the calls to child protective services, Desmond also faces severe harassment online, including death threats and the family’s personal information being published. Wendy even once saw people placing bets as to when Desmond would kill himself.

“It does scare me, the level of violence that we get,” said Wendy. “These people are really the abusers, honestly.”

Desmond isn’t the first drag kid to spark moral panic. Miss Mae Hem, a 9-year-old drag performer in Ohio, was also the subject of anti-gay posts on conservative websites. Miss Mae Hem even inspired a state Republican lawmaker to pen a bill that would prevent bars from hosting performances in which a “child simulates sexual activity.” It’s a characterization that the child’s mom said is completely false.

For the most part, Wendy has been able to shield Desmond from the abuse by monitoring his access to the internet and social media. But, when he started being interviewed by child protective services, things changed.

“They would ask him really hard questions for a kid, like if he was being abused at home,” she said. “For a while he started thinking it was his fault.”

Wendy said she thinks these online abusers are just making a target of Desmond because he’s so visible, but really their problem is with all LGBT or gender-nonconforming kids.

Despite it all, Desmond keeps performing. The negativity aside, Wendy said they get tons of messages from other kids saying Desmond helped them come out, or be more confident, or get past suicidal feelings.

“He really is inspired by all of the people that he inspires,” said Wendy.

18 seconds ago I'm Going To Narnia