Jacob Chansley has been in solitary confinement for almost eleven months now, and he was recently sentenced to 41 months in prison for his peaceful involvement in the January 6th protest.

Jacob did not cause any violence, he listened to officers and he was let in the building by Capitol Hill police.

Jacob was arrested on January 9th after turning himself in, not knowing that he would face up to 25 years in prison.

“The whole process was really surreal. I didn’t know how long it was going to last.”, said Chansley.

Video from inside of the U.S. Capitol on January 6th shows Jake complying with police and urging others to be peaceful.

Although they are trying to steal his first amendment, he is at ease knowing that he can speak to The Gateway Pundit audience without censorship.

Jake is a free-spirited and highly intelligent individual.

His face was plastered all over the fake news media as the face of the “January 6th insurrection”, and he is the victim of media slander and ridicule. 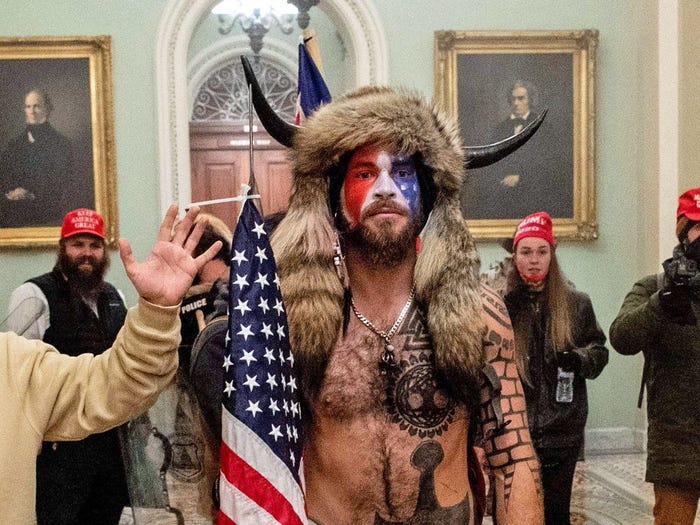 In this 40 minute exclusive interview, The Gateway Pundit correspondent Jordan Conradson spoke to Chansley from the Alexandrian Detention Center in Alexandria Virginia, where he is being held in solitary confinement with real criminals including illegal immigrants guilty of drug trafficking.

Chansley: I’m still in solitary. For the most part throughout the entirety of my time in incarceration, I have been in solitary confinement 22 hours a day, seven days a week. I only get two hours to go out of my cell. Whether that be a shower or shave or use the phone or watch TV or whatever, so it’s been rough. For the most part I’ve been treated well though, I’m not gonna lie. For the most part. I’ve been treated well, with the exception of a few power-hungry deputies and guards that have treated me poorly along the way. I can say though, I have never experienced real racism until I went to the DC jail. There was this African woman at the DC jail there was one of the doctors there. And she thought I was a racist, and a white supremacist, and an extremist and all this other stuff. And I was telling her no, I’m none of those things. Because I support Donald Trump? You know, you thought that I was a racist? you thought that I was a white supremacist? No, I said, I’ve dated black women. I love people of all races. I think black women are beautiful. And she’s like, ‘I can’t believe a black woman would ever date you.’ and I was like oh my God. This woman is just outwardly openly being racist. I mean, because if things were flipped, and you had a white nurse telling that to a black man,  “I can’t believe a white woman would ever date you.” That would be considered extremely racist. But you flip it. It’s like, this woman doesn’t realize she’s being racist? There was also a BLM activist as a guard in the DC jail and I know he was BLM because he was wearing a mask that said “black lives matter”. And he was intentionally like provoking some of the inmates, some of the Trump supporters. DC jail is a terrible place. And I’m not from what I understand, Marshalls actually did an inspection over there and I’ve heard that it was so atrocious that they couldn’t even believe it was a correctional facility in the United States of America. But as funny as it is though, I’ve actually met a lot of law enforcement that have slyly admitted to me that, you know, secretly they were rooting for me. And that they wished that I wasn’t being made an example of many of them actually covertly admitted, you know, kind of under their breath that they also believed that the election was rigged and stolen, and I’m not surprised I mean, think about it. The opposition, the other side, the Democrats. These are people that want to demonize law enforcement, they want to defund the police. You know, that means there’s a surprise me that law enforcement would be voting for Trump.

Conradson: Yeah, I’ll tell you what, the entire country knows that the election was rigged and stolen and the fake news media, what they’ve done to you and what they’ve done to President Trump, it’s terrible. So how do you feel about how the media has treated you? Obviously that probably was a key factor in what led to that woman treating you like some sort of white supremacist and being racist towards you. How do you feel about the media?

WATCH: ‘Get her under control’: ‘Karen’ attacks Black man at Hilton hotel after he was allegedly served first