Christopher Columbus was a Genovese-born explorer who became a subject of the Hispanic Monarchy in order to lead a Spanish enterprise to cross the Atlantic Ocean in search of an alternative route to the Far East, only to land in the New World. Columbus’s first voyage to the New World on the Spanish ships Santa María, Niña, and La Pinta took approximately three months. Columbus and his crew’s arrival in the New World initiated the colonisation of the Americas by Spain, followed in the ensuing centuries by other European powers, as well as the transfer of plants, animals, culture, human populations, and technology between the New World and the Old World, an event referred to by some late 20th‐century historians as the Columbian Exchange.[1]Columbus Day is a national holiday in many countries of the Americas and elsewhere, and a federal holiday in the United States, which officially celebrates the anniversary of Christopher Columbus’s arrival in the Americas on October 12, 1492.[a] 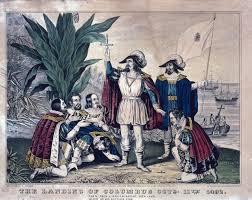 The landing is celebrated as Columbus Day in the United States, but the name varies on the international spectrum. The Dominican Republic, the epicenter of the historical event and where Columbus first set foot, celebrates this day as “The Discovery of the Americas”. In some Latin American countries, October 12 is known as Día de la Raza or “Day of the Race”. This is the case for Mexico, which inspired Jose Vasconcelos’ book celebrating the Day of the Iberoamerican Race. Some countries such as Spain refer to the holiday as Día de la Hispanidad and Fiesta Nacional de España, where it coincides with the religious festivity of La Virgen del Pilar. Since 2009, Peru has celebrated Día de los pueblos originarios y el diálogo intercultural (“Indigenous Peoples and Intercultural Dialogue Day”).[2] Belize and Uruguay celebrate it as Pan American Day and Día de las Américas (“Day of the Americas”). Giornata Nazionale di Cristoforo Colombo or Festa Nazionale di Cristoforo Colombo is the formal name of the celebration in Italy as well as in Little Italys around the world.[3][4]

Cop-turned-NASA-exec, 54, is found guilty of murder after jury was shown horrific video of him executing his National Guardsman neighbor

4 hours ago Hey YouKnowMe💁🏻WE THE NORTH!🏀