In 1932, when journalist George Schuyler traveled with Roy Wilkins to report on abuses of black levee workers in Mississippi and Louisiana for the NAACP, he stopped to consult with “Dr. Dumas” in Vidalia, Louisiana. Dumas was later described in Schuyler’s 1966 autobiography, Black and Conservative, as “a former president of the National Medical Association, . . . a distinguished, courtly, and wealthy mulatto who owned a large white mansion atop a double terrace, six blocks of downtown real estate and a big plantation. He was one of a considerable number of Negroes in the vicinity who were planters and slaveholders before the Civil War. . . .”

During the Great Depression, Dr. Dumas was doing quite well, thanks to inherited wealth from slave ownership.

Those like Dumas and his descendants, however, do not figure in calls for reparations, which, according to Robin Rue Simmons, are needed to make up for “the massive intergenerational economic devastation inflicted by slavery.” Simmons, a former alderman in Evanston, Illinois, helped usher through legislation that allocated cannabis tax revenue as reparations to residents or descendants of a redlined district. She wrote in the Washington Post that such payments were still “inadequate,” a mere “down payment on what is rightfully owed to millions of African Americans.”

Is Simmons thinking of the over 10,000 slaves owned by free blacks in 1830, in Louisiana, Maryland, South Carolina, and Virginia? As David Lightner and Alexander Ragan show, with black slaveowners constituting about two percent of the free black population of the South, and white slaveowners constituting six percent of whites, “a southern white was just three times more likely to own slaves than was a southern free black.” On a national level, “a white American was not even twice as likely as a free black American to be a slaveholder in 1830.”

Today, however, histories that ignore black slave ownership and the role of African slave merchants, and wildly exaggerate the economic contributions of slavery, are used to argue for reparations.

Listed among the “resources” at Simmons’s new nonprofit FirstRepair that advocates for “Local Reparations, Nationally” is The 1619 Project, the special issue of the New York Times Magazine published for the 400th anniversary of the arrival of the first Africans at Jamestown.

A collaborator of The 1619 Project’s creator Nikole Hannah-Jones, Ta-Nehisi Coates, testified for reparations before Congress in June 2019, claiming that by 1836, “more than $600 million, almost half of the economic activity in the United States derived directly or indirectly from the cotton produced by the million-odd slaves.” This comes from The Half That Has Never Been Told by Edward Baptist, a member of the neo-Marxist New History of Capitalism school. 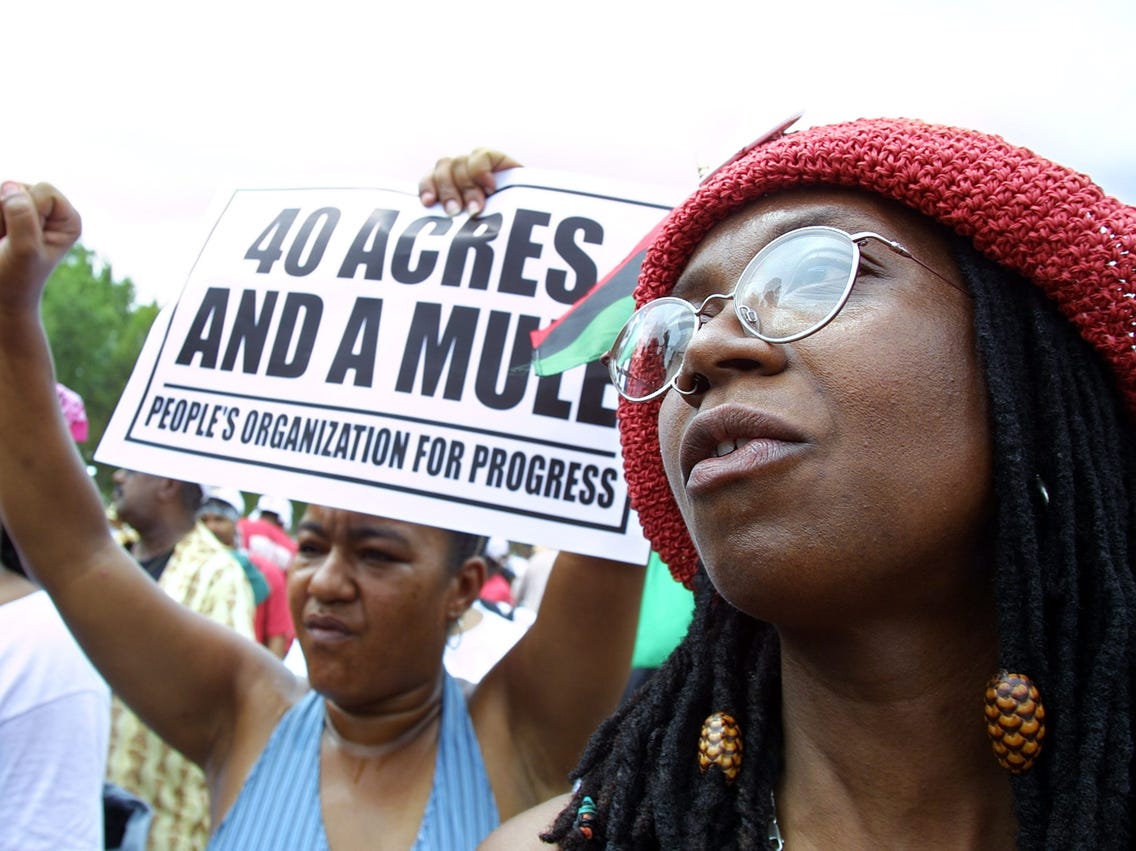 A couple months later, in The 1619 Project, Hannah-Jones similarly wrote, “[Slaves] grew and picked cotton that at the height of slavery was the nation’s most valuable commodity, accounting for half of all American exports and 66 percent of the world’s supply.” One of the Project’s longer essays, by

But Hannah-Jones, in her June 30, 2020, New York Times Magazine article, “What Is Owed,” asserted that “white Americans’ centuries-long economic head start” and “their generational wealth and higher incomes” nullified antidiscrimination laws. They maintained “caste.” “[T]he racism we are fighting today,” she repeated, “was originally conjured to justify working unfree black people, often until death, to generate extravagant riches for European colonial powers, the white planter class and all the ancillary white people from Midwestern farmers to bankers to sailors to textile workers, who earned their living and built their wealth from free black labor and the products that labor produced.” Therefore, cash reparations should “go to any person who has documentation that he or she identified as a black person for at least 10 years before the beginning of any reparations process and can trace at least one ancestor back to American slavery.”

Ohio woman swears she recorded Bigfoot, though experts are skeptical