A Kentucky YouTuber famous for his gun videos nearly died last month when a gun he was using for a new video suddenly exploded.

Scott DeShields Jr., who runs the Kentucky Ballistics YouTube page, was shooting a fire hydrant at the end of his gun range with a Serbu 0.50-caliber rifle on April 9, when the gun exploded into pieces, puncturing him in the throat and causing temporary blindness.

‘I shouldn’t be standing here, I should be six-feet under’ DeShields, a former Kentucky State Patrol Officer, said in a 20-minute long video explaining the incident more than two weeks later.

He said he was using SLAP rounds for the video — high-powered ammunition that isn’t made anymore and is expensive to buy. They were powerful enough to pass through the fire hydrant DeShields was shooting, but he now believes they were tampered with, calling them ‘very hot.’

DeShields managed to hit the fire hydrant several times, drilling several holes in it, but ‘the SLAP rounds were acting a little funny,’ he said, with one landing about a foot and a half lower and to the right of where he was aiming.

He decided to fire one more round, aiming for the thickest part of the fire hydrant, when the gun exploded, causing the steel cap to blow off of it.

The cap knocked ears off of the gun that were intended to keep users from closing the gun without everything being properly in place, and struck DeShields in his face, breaking his nose and his orbital bone in three places even though he was wearing protective goggles at the time.

One of the ears, meanwhile, zipped past DeShields’ head and tore a hole through his hat, causing it to go flying seven to eight feet, and the other blasted into his throat, lacerated his jugular vein and punctured his right lung.

He went instantly blind in his right eye, and was ‘in a daze’ following the ‘freak accident’ until his father, who was filming the incident, ran over to him and told him to keep his thumb against the hole in his throat, so he would not bleed out.

‘If he had not been out there with me, that would’ve been the end of me,’ DeShields said of his father in the video.

The two then ran to DeShields’ truck, which they used to speed to a local hospital.

DeShields also called 911 personally, to prevent himself from losing consciousness, and kept himself awake by thinking about his children.

When he arrived at the hospital, a doctor informed DeShields that his right lung had collapsed because it was full of blood, and he noticed that his index finger on his left hand was ‘shaped like a W.’

DeShields was intubated while he was still awake and was promptly flown to Vanderbilt University Medical Center in Nashville, Tennessee, where he said he was ‘hooked up to every machine possible.’

The doctors cut open his chest and pinched off his jugular vein to repair it and his lung, putting him at a risk of a stroke, as the jugular vein supplies oxygenated blood to the brain.

A nurse provided him with a whiteboard so he can continue to communicate with his wife, and he needed five units of blood — even though the doctors told him a man of his stature typically only has six to eight units of blood in their body.

DeShields spent two days with tubes coming out of his chest, and left the trauma unit after just a few days.

‘I’m healing extremely fast,’ he said in the video, which shows him with a bandage covering his left arm, a bandage over his nose, and sutures down his front.

‘I am healing at a Wolverine rate,’ he said in reference to the Marvel superhero.

He now plans on continuing his YouTube series, saying he has some videos he plans to upload while he is in recovery.

‘I’m not going to quit doing what I love,’ he said. ‘There’s nothing that can keep me from continuing on.’ 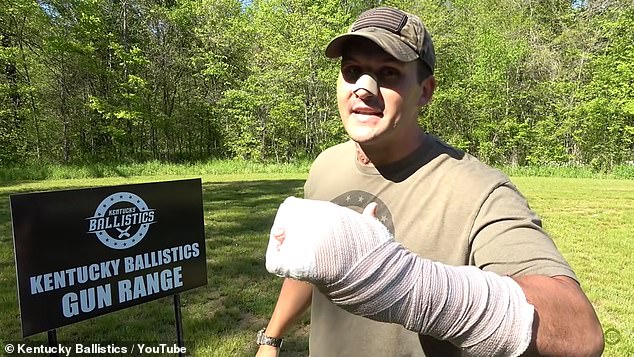